Originally called the Frazier Plantation House, the William Frazier House near Magnolia (Columbia County) was constructed in 185Frog Level Court House2 by William Frazier, a native of Ireland who was born in 1805. According to some, the frivolous name of “Frog Level” was suggested by B. F. Askew, a young attorney in the area, because of the noise created by the numerous frogs in the river bottoms near the house. Others suggest that the plantation house may have stood at the center of a settlement named Frog Level, much like similar settlements in North Carolina and other southeastern states, and that as the settlement declined due to the growth of Magnolia, the name was transferred to the one house. The Frazier House, or Frog Level, is one of the few remaining antebellum plantation homes in southwestern Arkansas. It was added to the National Register of Historic Places on September 22, 1972.

The two-story structure has a center hall and two rooms on each floor. Large chimneys are located at either end, and there is a two-story temple portico in the front. The main entrance on the first floor has double doors with simple rectangular sidelights and transom. A matching door on the second floor opens into a gallery. The house is crowned with a simple gable roof, and its exterior is covered with clapboard. The four main rooms of the house all measure twenty-two square feet. The fireplace mantels are hand carved in simple designs, while the floors are heart of pine, six inches wide and half an inch thick.

The Frazier estate illustrates the devastating effect of the Civil War on property values in the South. In 1866, the Frazier property, then consisting of Frog Level and some 1,046 surrounding acres, was valued at $1,156, barely one-tenth of the total valuation of $11,275 in 1861 (a figure that then included the value of approximately sixteen slaves). Frog Level is a short distance—only a few hundred feet—from the Ferguson and Morgan store, where the first term of the Columbia County Court was held on March 21, 1853. Following the Civil War, a government-controlled brewery was operated at Frog Level. Following restoration, the original hand-blown glass for the sidelights and transom was put back in place. Several of the doors of Frog Level still have their original hand-wrought locks, and the original wooden dado extends up the stairway and around each of the four main rooms. An original chimney of the house fell during a windstorm in 2007 but has been rebuilt. As of 2011, the house is privately owned. 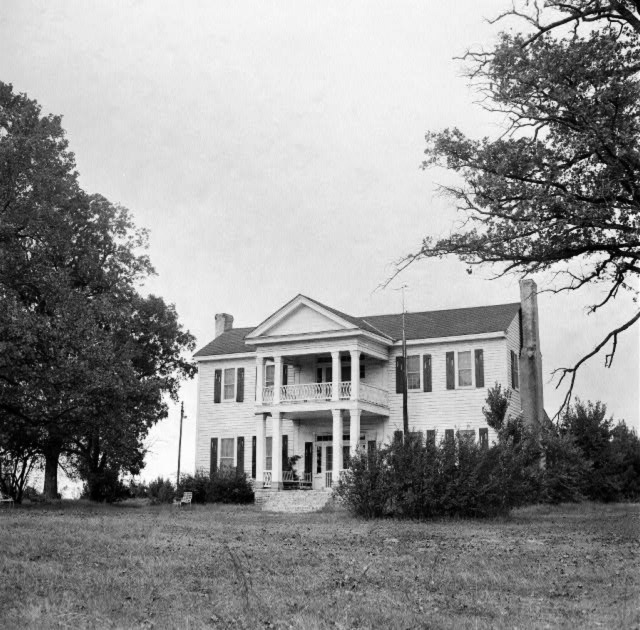 The early settlers of Columbia County were Native American Indians until white settlers began to move into the area after Arkansas achieved statehood in 1836. The first early communities were Spotsville, Atlanta, Calhoun and Lamartine located in an area loosely described to have the Dorcheat drainage on the west border and Cornie Creek on the east. The county was more clearly defined in 1852 when Columbia County gained official status with its formation as the 55th county from four surrounding counties, Lafayette, Hempstead, Ouachita, and Union.

The first term of the county court was held at Ferguson and Morgan's store located about six miles from Magnolia near "Frog Level" plantation. The new county seat of Magnolia was laid out by the new Commissioners and given its name after a suggestion by the daughter of a Commissioner, Miss Elizabeth Harper in 1855. The original survey of Magnolia was one mile square and the court house square is a copy of the square of Oxford, Mississippi.

Relative isolation has always been a problem for the county. In 1852 it was the only county in the state without a navigable river. The first railroad was operational in 1882 but passed north through McNeil and Waldo. Magnolia citizens quickly raised the funds to construct a branch railroad line from Magnolia to McNeil.

Cotton was "king" in Magnolia. With the completion of the spur, markets were drawn to Magnolia and its future was assured. You can still see the cotton traders on the square in the East Main mural. Lumber interest sprang up and brought the railroad from the South and Magnolia continued to grow.

On July 4, 1906 a new Court House, the third on the square, was dedicated. It is still the centerpiece of our square. Magnolia business leaders in 1909 raised funds to secure the Third District Agricultural School. The school developed into Southern Arkansas University and is a great economic asset of the community. The "Blue and Gold Vision" leads the growth of the college with new dorms, the Reynolds Center, new farm land, and a future arena.

During the "Great Depression" Columbia County began a decline in agriculture and its citizens experienced the same economic crisis that most of the nation experienced. In 1938, oil was discovered in Columbia and continues today as a great natural resource along with timber for the County. A new natural resources industry arrived in the mid 1960s with the discovery of bromine bringing chemical companies to the county.

The City of Magnolia built the City Hospital in 1939 when the population of the County was close to 30,000 residents. Recently, a new City Hospital was completed at an expense of close to 40 million and offers state of the art hospital services.

We are proud of our community and celebrate each year with the Blossom Festival, the World Championship Steak Cook-Off, and our Sidewalk Art Show.